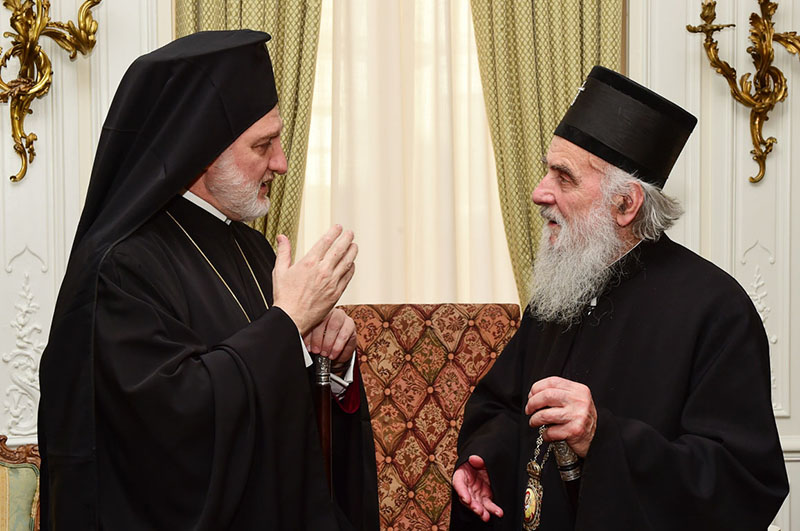 Patriarch Irinej of Serbia visited the Greek Archdiocese of America

On March 4, 2020 the Primate of the Serbian Orthodox Church, His Holiness Patriarch Irinej, visited the New York Headquarters of the Greek Orthodox Archdiocese of America and met with its Primate Archbishop Elpidophoros.

In the welcoming remarks His Eminence Archbishop Elpidophoros expressed the wish that the Churches of Constantinople and Serbia continue to cultivate peace, harmony, fraternal fellowship, and cooperation, always praying for the well-being and spiritual prosperity of the clergy and laity of both churches.

“We are the children of Byzantium,” stated Patriarch Irinej, who continued that in the 13th century the Serbian Church was given autocephaly by the Ecumenical Patriarchate of Constantinople, which was its Mother Church. His Beatitude underlined that for centuries both Churches always extended a helping hand to each other in difficult situations. According to the Serbian Primate, the Serbian and Greek nations remain bound by close spiritual ties. It is especially prominent in America as the hierarchs, clergy, and laity of both churches often visit each other’s parishes, participating in feasts, praying, and receiving Holy Communion together.

After the official part of meeting Patriarch Irinej and Archbishop Elpidophoros prayed together in the Archdiocesan Chapel of St. Andrew.