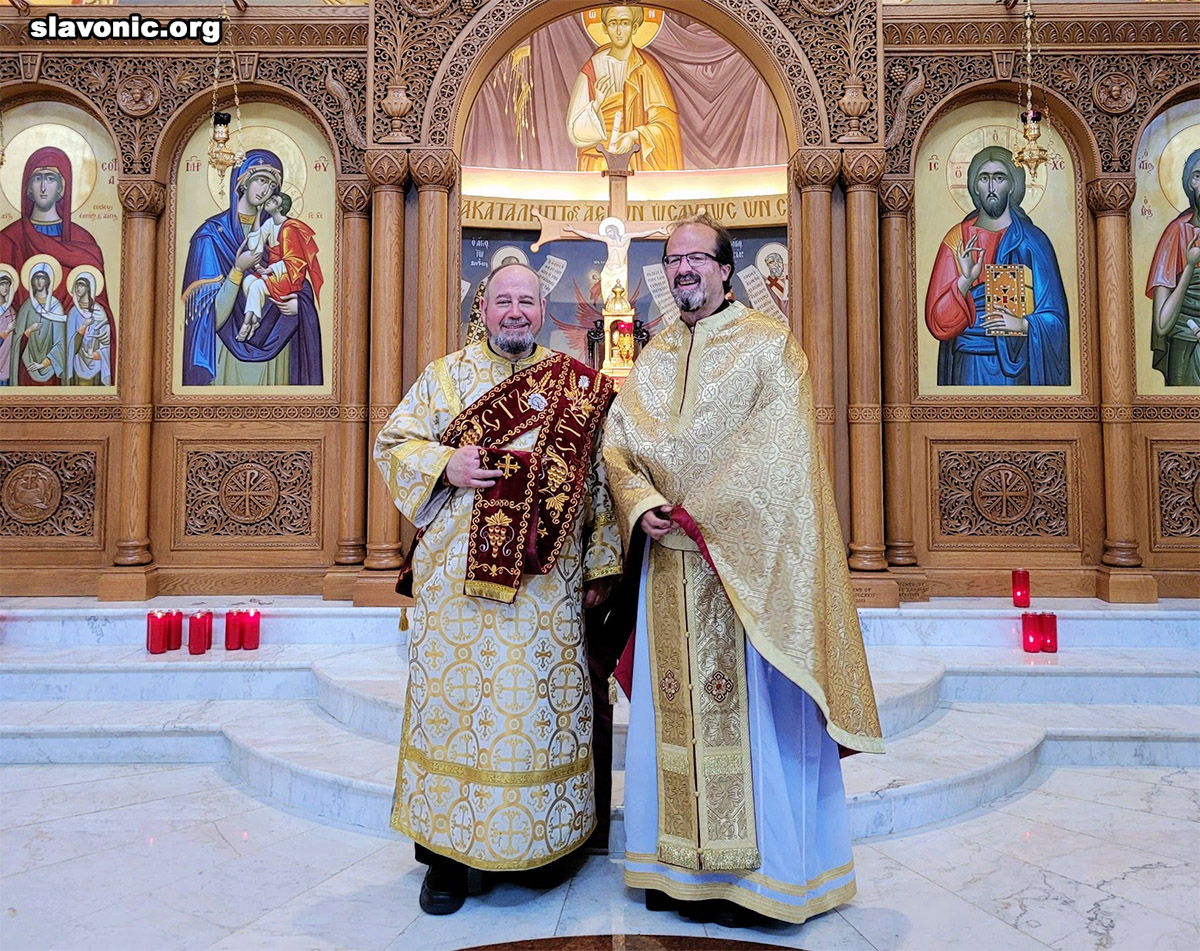 Visit by Deacon George to St. Sophia in Jeffersonville, PA

Located in the historic Valley Forge area, the classic Byzantine-style church is a local landmark, attracting both worshippers and visitors throughout the year. The beautiful icons and frescoes that adorn its interior are in the late Byzantine style by a celebrated Greek iconographer. Known throughout the state for their hospitality to guests and their Greek Festival in the fall, St. Sophia has introduced both Orthodox Christianity and Hellenic culture to many Pennsylvanians.

Deacon George was visiting his god daughter and her parents who are parishioners at St. Sophia. He was invited by the pastor, Fr. Peter Thornberg, to serve matins and divine liturgy for the Sunday of All Saints. The service, normally conducted in English and Greek, also included Church Slavonic in honor of Fr. George’s participation as a representative of the Slavic Orthodox Vicariate of America which is under the Greek Orthodox Archdiocese and the Ecumenical Patriarchate.

At the end of the service Fr. Peter welcomed Deacon George and thanked him for his participation. He discussed how the various traditions of Orthodox churches in America reflect the ecumenical nature of the Church. Fr. Peter emphasized out how important it is for Orthodox Christians to stand together in an increasingly secular and anti-religious atmosphere that has developed. Pointing out that the Church was historically always at its strongest during times of open persecution, the current danger is far more subtle and therefore a greater threat than Communism was in the 20th century. Being the Sunday of All Saints, he cited the countless examples of martyrs, missionaries, monks, and hierarchs who sacrificed themselves for their faith.

A coffee hour was held after in the community recreation building facing the church. Fr. George was given the opportunity to meet with the parishioners and tell them about the newly created Slavic Orthodox Vicariate. Both Fr. Peter and the community invited their guest to return in the future. The Deacon expressed his gratitude for the warm welcome and fellowship hoping that Fr. Peter would come to visit in Brooklyn as well.