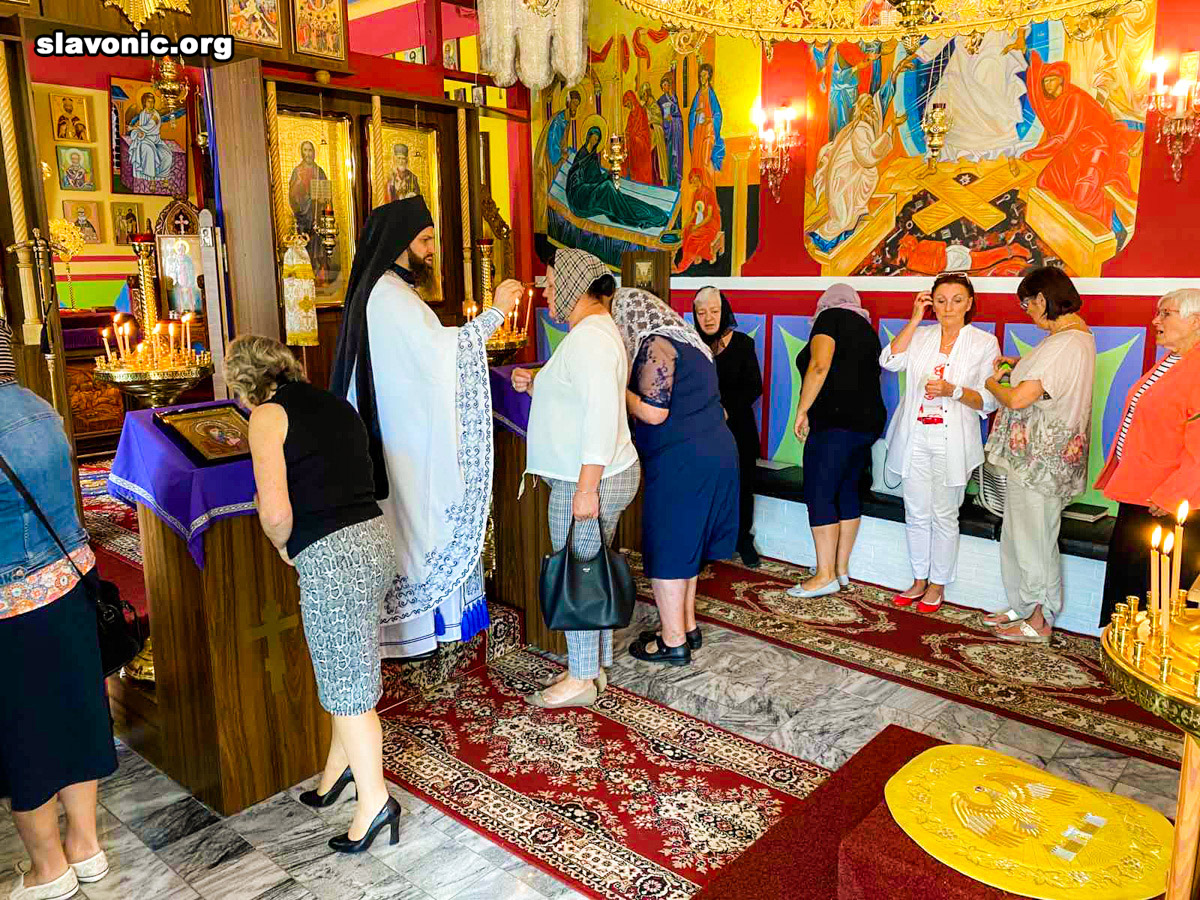 With the blessing of the Greek Orthodox Archbishop of America Elpidophoros Archimandrite Alexander Belya, the Vicar of the Slavic Orthodox Vicariate, made a pilgrimage to the Orthodox Christian holy sites of Czechia and Slovakia.

On September 6, Archimandrite Alexander visited the monastery of Saint Procopius of Sázava (feast day September 16) in the city of Most (north-west Czechia). During the Divine Liturgy in the church of the Nativity of the Most Holy Theotokos Monastery, he concelebrated with the Hegumen (Abbot) of the monastery, Bishop Isaiah of Shumperk, Vicar of the Dioceses of Olomouc and Brno. At the end of the service, His Grace thanked the guest for serving with him and sent his prayers and respects to His All-Holiness Patriarch Bartholomew and Archbishop Elpidophoros. He also conveyed his prayers in support to the Ecumenical Patriarchate. Archimandrite Alexander gave Bishop Isaiah a gift to commemorate the visit.  His Grace reciprocated by presenting him with a decorated and signed pectoral cross. After the service, they continued their brotherly discourse over Sunday agapa (dinner) remembering their student years in the University of Presov in Slovakia where they studied together for five years. Bishop Isaiah and Archimandrite Alexander also discussed the organization and development of the Slavic Orthodox Vicariate in America as well as the current situation of Orthodox Christianity in Czechia, Slovakia, and the United States.

Later that day Archimandrite Alexander visited the Monastery of the Transfiguration of the Lord in the village of Teshov in the Karloviy Vary region of Czechia. He was welcomed by His Eminence Christopher, the former Archbishop of Prague and Metropolitan of Czechia and Slovakia, who has been living in the monastery since his retirement in 2013. His Eminence gave him a brief tour around the monastery followed by a conversation over tea.  The Hegumen (Abbot) of the monastery, Archimandrite Dorotheos, who is an old friend of the Archimandrite, also joined them. The Abbot had previously visited the Cathedral of St. Matrona of Moscow in Miami at the invitation of Archimandrite Alexander. All three shared their memories, especially from their student days when former Archbishop Christopher was their professor at the Theological Faculty of the University of Presov.  His Eminence recalled his trip to New York in 2016, when he co-served at the Cathedral of St. John the Forerunner & Baptist in Brooklyn, NY. At the end of their visit His Eminence Christopher sent greetings and prayers for His All-Holiness Patriarch Bartholomew and Archbishop Elpidophoros, as well as words of support to the Ecumenical Church. In turn, Archimandrite Alexander thanked his friends for their hospitality.

On September 8, Archimandrite Alexander visited Archbishop Simeon of Olomouc and Brno. His Eminence is now 94 years old and one of the oldest living Orthodox Christian hierarchs. Archbishop Simeon studied at the Leningrad Theological Academy and Seminary at the same time as the future Patriarch of Russia His Holiness Alexis II. As a theological student he was fortunate enough to have met two men who are now glorified as saints, St. Luke of Crimea and St. Seraphim of Vyritsa. He met with the latter during a holiday trip to Vyritsa with one of his classmates. Arriving at house of Father Seraphim, they saw a huge line of people waiting to meet with the holy man. They joined those patiently waiting for their turn. At one point, a nun came out of the house and said that the priest would like to see two students from the seminary, whose arrival the Lord had revealed to him. She picked them out of the line and asked them to come to Father Seraphim without waiting for their turn. The saint predicted to the future hierarch the revival of the Czech Orthodox Church, which at that time was banned. He also predicted that Simeon would become an archbishop and work hard for the revival of Orthodoxy in Moravia (as Czechia was previously called), where Christianity was spread to the Slavic peoples by the Byzantine missionaries and brothers Saints Cyril and Methodius. Over time, the prophecies came true. Archimandrite Alexander was ordained to the ranks of deacon and then priest by His Eminence Archbishop Simeon. At one time Fr. Alexander had the obedience of being a personal secretary to His Eminence for eight years. At the end of the spiritually joyful meeting, Archimandrite Alexander conveyed a message from Ecumenical Patriarch Bartholomew, who remembers and prays for His Eminence. Archimandrite Alexander also gave him a gift to commemorate the visit. In his turn, Archbishop Simeon sent his prayers in support to His All-Holiness Patriarch Bartholomew, Archbishop Elpidophoros and the entire Ecumenical Patriarchate. He gave copies of his recently published books as a gift to Archimandrite Alexander.

During his stay in the Czechia, Archimandrite Alexander had several more meetings with friends and former fellow students, and then he departed for America.