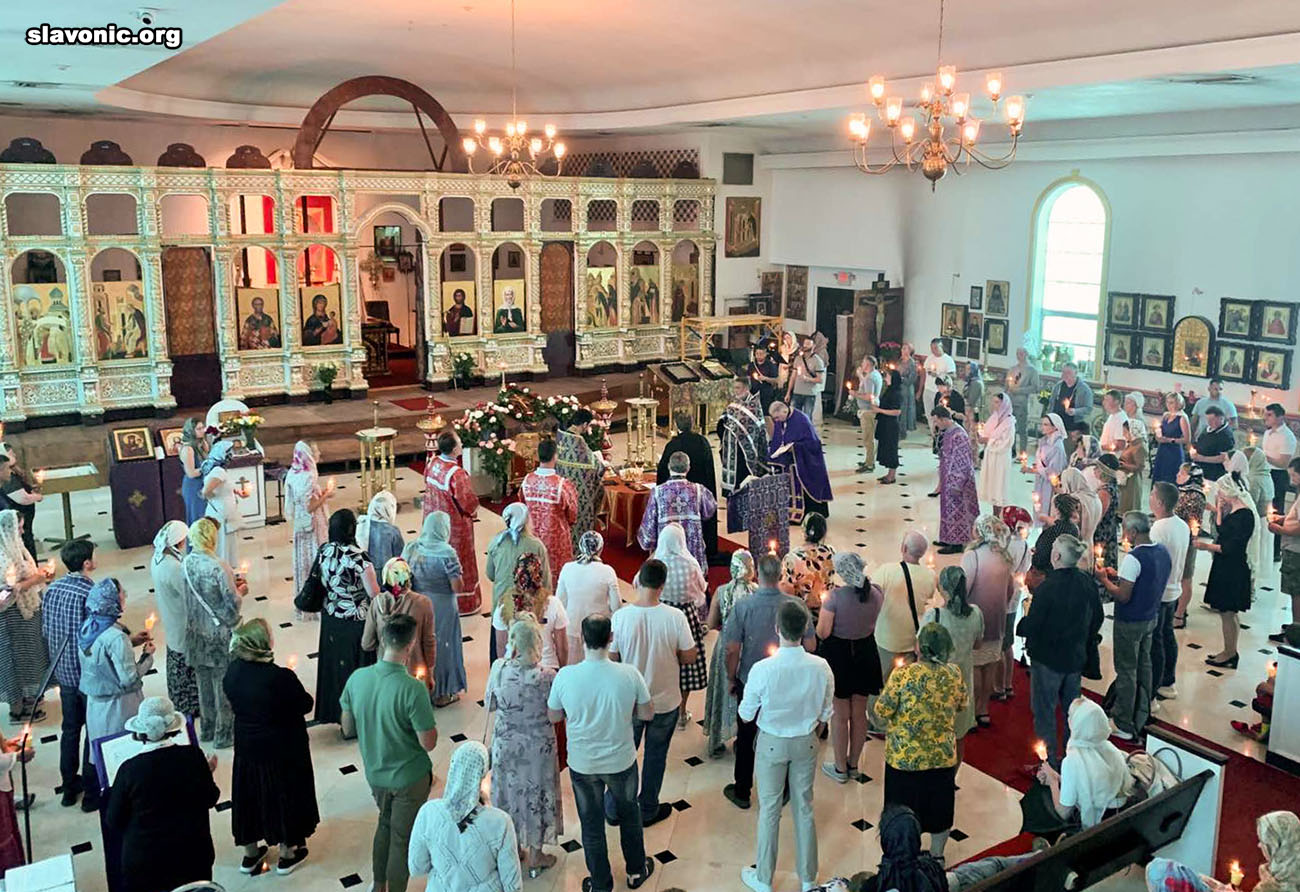 The Sacrament of Unction at the Cathedral of St. Matrona of Moscow in the Week of the Holy Cross

The Week of the Holy Cross is the third in Great Lent.  In the Orthodox Christian tradition it is literally called “the Adoration of the  Holy Cross.”  On this Sunday in the middle of the Lenten period, in order to maintain the spiritual strength of the believers during their fast, the Church established the tradition of bringing and displaying the Cross in the center of the church for worship.  It remains there for veneration the entire week.

The Cathedral of St. Matrona of Moscow in Miami established a tradition of also performing the Sacrament of  Holy Unction during this week in order to further encourage the community’s believers.  On March 27 the sacred rite of consecration and anointing of holy oil was led by Archimandrite Alexander, the Vicar of the Slavic Orthodox Vicariate of America.  He served with an assembly of clergy, including Archpriests Mikhail Gutsul and Vasily Deyak, the clerics of the monastery of St. Nicholas in Fort Myers (Florida), Fr. Rostislav Zadorozhny, Rector of the Church of St. Nicholas the Wonderworker in Red Bank (New Jersey), and Hegumen David, a representative of the Serbian Orthodox Church.

After the service, Archimandrite Alexander reminded the faithful about the significance of Holy Unction for both soul and body and congratulated them on their taking the  sacrament.  As an example of God’s help to His  believers, Father Alexander told an inspirational story of a phone call from the daughter of a woman who had long been in the hospital with a serious condition.  “When I arrived to anoint her, I recognized that she was a faithful parishioner, who at that moment was in a coma.  In the face of her daughter, I saw the Gospel example of faith, when the Lord healed a person, according to the faith of loved ones.  By the grace of God and through our prayers, the woman came out of the coma and now, together with her family, thanks the Lord for healing.  As we can see, brothers and sisters, the Sacrament of Unction has great power when it is received with sincerity as the Lord gives healing through faith.  Now many are still or have been sick with Covid-19. Thus, it is important  we believe in Christ, Our Lord and Savior, because only then can we be confident in receiving the healing of our soul and body.”

The Vicar also expressed his gratitude to the clergy who traveled from distant places to participate in the Sacrament of Holy Unction.

Holy Unction is the sacrament of anointing with holy oil.  It is a sacred rite of healing the soul and body as mentioned in the New Testament.  It was established by the Holy Apostles, the Disciples of Our Lord Jesus Christ, along with the other Sacraments of the Church.  Having received from the Lord the power to “heal diseases,” “they anointed many sick people with oil and healed” (Mark 6:13).  We can find other evidence in the letter of the Apostle James, the first Bishop of Jerusalem, that states, “Is any of you sick, let him call for the presbyters (priests) of the Church, and let them pray over him, anointing him with oil in the name of the Lord. And the prayer of faith will heal the sick, and the Lord will raise him up; and if he has committed sins, they will be forgiven him” (James 5:14-15).  Offering prayers during the sacrament, the clergy also ask the Lord for the forgiveness of sins and the physical recovery of a person, the two concepts being directly related to each other.  At the same time, it must be understood that the healing power lies not in the oil, but in the “prayer of faith,” as the Apostle James writes.  As mentioned above, the forgiveness of sins, which is associated with the Unction, especially refers to the so-called old and “forgotten” sins which we cannot recall at the moment.  It does not apply though to serious “mortal” sins, like murder, adultery, and many others that need to be confessed before a priest at the Sacrament of Confession (Penance).  Through the forgiveness of forgotten sins, the Lord gives the faithful believers bodily healing and strength so that in future they can personally repent all their sins.