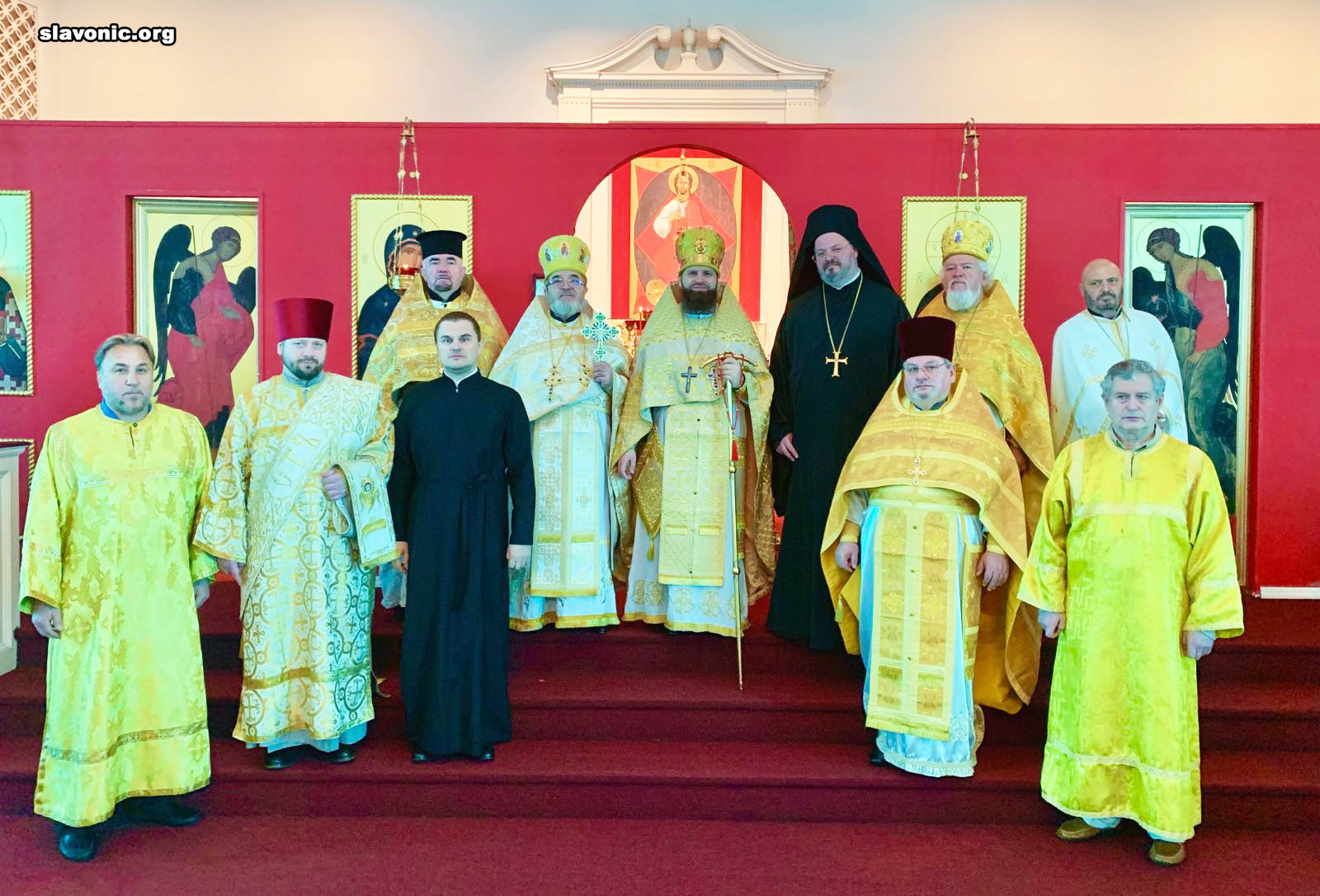 The Miami Cathedral Celebrates the 10th Anniversary of the Ordination of the Vicar of the Slavic Orthodox Vicariate, Archimandrite Alexander Belya

On February 12/ January 30 Old Style, the Orthodox Church celebrates the memory of the Three Holy Hierarchs.

During the reign of the Byzantine Emperor Alexius I Comnenus (1081–1118) a heated debate began in Constantinople, dividing the faithful into three camps.  The dispute was about which of the Church Fathers was the greatest.    Some believed it was St. Basil the Great based on his asceticism, while others argued for St. Gregory the Theologian due to his writings. A third group maintained it was St. John Chrysostom whose eloquence was unrivalled.  In 1084 John Mauropous, Metropolitan of Euchaita had a miraculous vision of all three, hearing the saints ordering him to stop debating which was the greatest and establish one day to honor them together.  This was how the feast day of the Three Hierarchs was established.

The Divine Liturgy was served at the Miami Cathedral of St. Matrona of Moscow, led by the Vicar of the Slavic Orthodox Vicariate of America Archimandrite Alexander. This day also marked the 10th anniversary of the ordination of Father Alexander to the diaconate and priesthood.

Archimandrite Alexander is a missionary who has been working for many years in Florida.  His efforts have created the largest Orthodox church in the region, the Miami Cathedral of St. Matrona of Moscow, as well as the restoration of the oldest Orthodox monastery in the state, St. Nicholas the Wonderworker in Fort Myers.  Since becoming the Vicar of the Slavic Orthodox Vicariate in 2020, he has proven himself a tireless pastor and administrator.  The Vicariate has been working on opening of new parishes of the Slavic Orthodox tradition in America.  Russian, Ukrainian, and Bulgarian communities have submitted applications to transfer to the Vicariate.

Archimandrite Alexander began his priestly service in the Orthodox Church of Czechia and Slovakia.  He graduated from the Orthodox Theological Faculty of the University of Prešov in Slovakia with a Master’s Degree in Theology, followed by a Doctorate in Theology from Charles University in Prague.  On February 12, 2011, Archbishop Simeon of Olomouc and Brno ordained Alexander Belya to the rank of deacon at the Dormition of the Theotokos monastery in Vilemovo.  On February 13 he was ordained to the rank of priest at the Cathedral of St. Viacheslav in Brno, taking monastic tonsure on the same day.  Father Alexander visited America for the first time when he accompanied the Primate of the Orthodox Church of the Czech Lands and Slovakia, His Beatitude Metropolitan Christopher, during an official visit.  This trip largely determined the further ministry of the Archimandrite in America.  At the end of that year, he returned to the United States as a missionary and performed the first divine service in the new Church of St. Matrona of Moscow in Miami.

Serving with Archimandrite Alexander at the Divine Liturgy for the Three Hierarchs was Archimandrite Charalampus Nichev who is a representative of the Bulgarian parishes under the Patriarchate of Constantinople, Archpriest Alexander Belya, Rector of St. John the Forerunner & Baptist Cathedral in Brooklyn (New York), Archimandrite Barsanuphius Podyma, Archpriests Michael Gutsul and John Spasyuk , Fr. Theodor Todorov, Rector of the Bulgarian parish of St. Nicholas in Hollywood (Florida), and  Protodeacon Rostislav Zadorozhny of the Brooklyn Cathedral.

At the end of the service, Archimandrite Alexander was officially congratulated on the 10th anniversary of his ordination.  Archimandrite Charalampus read out a letter from His All-Holiness Patriarch Bartholomew of Constantinople and presented him with an icon of the Martyr Theodore of Byzantium (+1795) as a gift on his behalf.  Ivan Belya, Warden of the Cathedral, thanked Father Alexander for his work and presented him with an icon of the Most Holy Theotokos “Joy of All Who Sorrow”.  The clergy of the Vicariate congratulated him as well.  The parishioners then honored their rector for all his years of service in Miami and presented him with an anniversary cake.  Archimandrite Alexander then thanked the clergy, parishioners and guests for their prayers and congratulations. On behalf of the clergy and laity of the Slavic Vicariate, Father Alexander expressed his gratitude to His All-Holiness Ecumenical Patriarch Bartholomew for his blessing and prayers, as well as his personal congratulations and gifts. He also expressed his gratitude to Archbishop Elpidophoros of America for his support, help, and paternal care of the Slavic Orthodox Vicariate, which was able to develop and expand under his leadership.