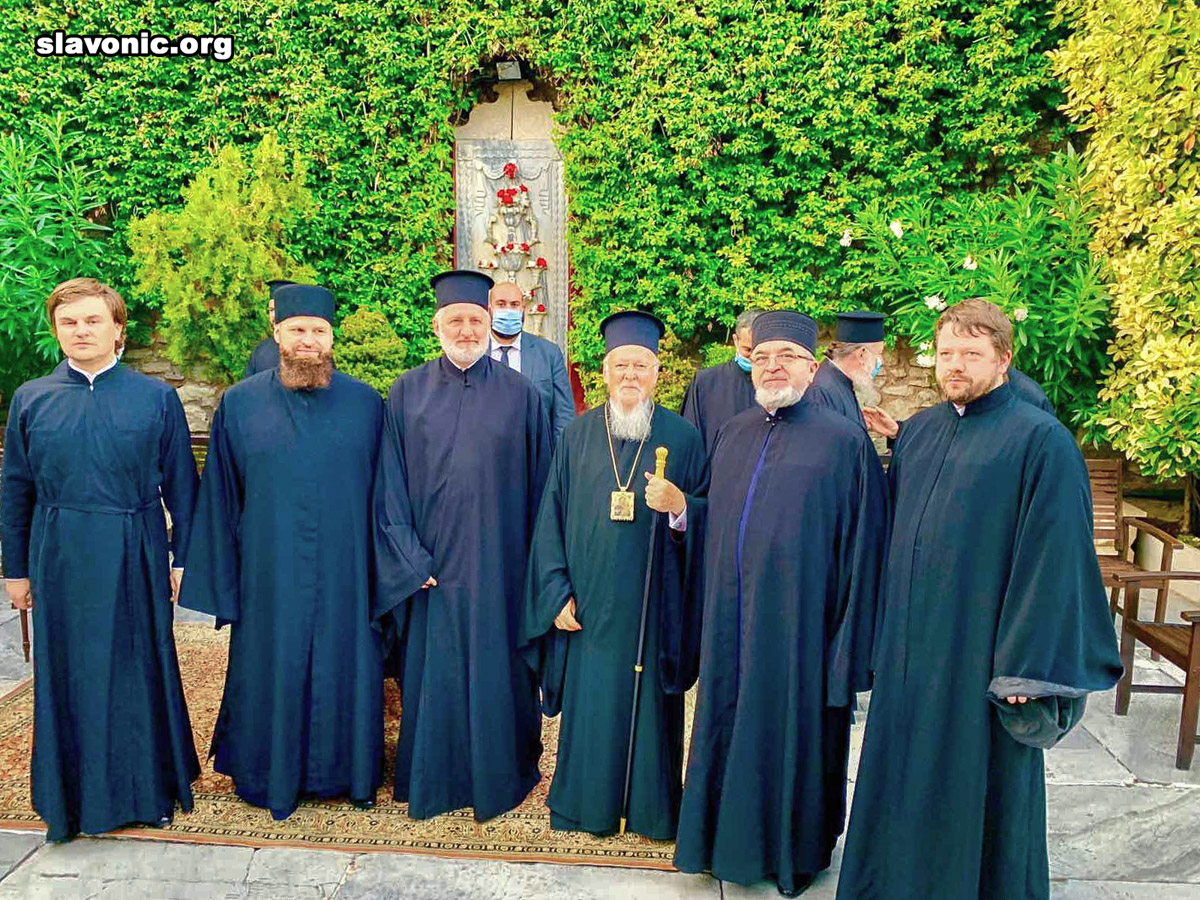 From August 31 – September 2 the clergy from the Slavic Orthodox Vicariate traveled to the Holy places of Constantinople (Istanbul).

On the evening of the first day of the pilgrimage they visited the famous Monastery of the Mother of God at the Spring. It is located in the Balikli quarter of Istanbul next to a nearby holy spring revered for its healing properties by Orthodox believers all over the world. The tradition of veneration at the site, which is popularly known as the “Life-Giving Spring”, and its icon of the Mother of God goes back to the year 457 A. D., when the sanctuary was built by the Emperor Leo I. The original building of the 5th-6th centuries was destroyed in the 15th by the Ottomans. The current church on the property of the monastery was built in the 19th century. The Patriarchs of Constantinople from the 19th century onwards are buried in the monastery church.

The celebration of vespers at the monastery was led by Patriarch Bartholomew. After the service, His Eminence Archbishop Elpidophoros first introduced the guests from the Slavic Orthodox Vicariate to His All-Holiness. The Patriarch welcomed the American visitors. He also congratulated Archpriest Alexander Belya on his upcoming 64th birthday (September 3). After the meeting, the pilgrims prayed at the monastery’s holy relics, visited the Spring and its ancient cemetery.

On September 1, the clergy of the Slavic Vicariate attended matins and the Divine Liturgy at the Patriarchal Cathedral of St. George celebrating the feastday of the Indiction. Most of the Holy Synod of the Ecumenical Patriarchate were present at the service. The Patriarch of Jerusalem, Theophilus III, was originally supposed to attend but was unable due to the COVID-19 pandemic. Since 1601 the Patriarchal Basilica of the Holy Great Martyr George the Victorious has been the seat of the Ecumenical Patriarchate of Constantinople.  This principal Eastern Orthodox cathedral is the spiritual center for Orthodox Greeks all over the world. Architecturally, it is a classic three-aisled basilica, outwardly modest but richly decorated inside. Among the holy relics of the cathedral is a fragment of the pillar of Christ’s Scourging from Jerusalem, also called the Column of Flagellation, with the remains of a ring to which, according to legend, Our Savior was tied during the scourging. Two icons of the Mother of God, “Panagia Faneromeni”(“All Holy Mother of God Who was Revealed”) and “Panagia Pammakaristou” (“All Holy Mother of God Who is Merciful”), are especially revered as well as the reliquaries of the Three Hierarchs (St. Gregory the Theologian, St. John Chrysostom, and St. Basil the Great). On the site of the cathedral complex there are the residence of the Ecumenical Patriarch, administrative buildings, and the Patriarchal Library.

On September 2, the pilgrims visited Hagia Sophia or the Cathedral of St. Sophia, revered by Slavic Orthodox Christians as the site of the baptism of the Equal-to-the-Apostles Princess Olga of Kiev. St. Sophia or the Cathedral of Holy Wisdom, is in the historical center of Constantinople. It is the greatest surviving monument of Eastern Roman architecture and a symbol of the “Golden Age” of the Byzantine Empire. It is also called “the eighth wonder of the world.” The majestic cathedral was built in 532-537 during the reign of Emperor Justinian I. Since more than ten thousand people were involved in the construction of Hagia Sophia, it was possible to build it in just 5 years.  For over a thousand years, St. Sophia of Constantinople was the largest Christian church (until the Renaissance when St. Peter’s Cathedral in Rome was built). After the conquest of Constantinople by the Ottomans, it was turned into a mosque. In 1934 St. Sophia was given the status of a museum and a UNESCO monument of Byzantine architecture. In 2020, it was officially changed into the Hagia Sophia Grand Mosque despite protests throughout the world.

On the same day, the Vicariate clergy visited the Courtyard/Compound of the Russian St. Panteleimon Monastery on the Holy Mount Athos, which is also known as Rossikon. It is located near the pier in the Karakoy quarter of Istanbul (Ancient Galata). This courtyard was constructed in 1873, when mass pilgrimages from Russia to the Holy Land and Mount Athos began, with a stopover in Constantinople. The Courtyard/Compound is a six-story building. On the upper floor there is a small church dedicated to St. Panteleimon with the lower ones providing rooms for pilgrims and the monastic community that runs it. This was followed by a stop at the nearby Courtyard/Compound of the Skete of Apostle Andrew and Great Anthony on the Holy Mount Athos. It is another multi-story Russian pilgrim hostel with a church dedicated to Our Lady of Kazan or the Kazan Icon of the Mother of God on the top floor. It was built in 1888-1890.

At the end of the day, with the blessing of His All-Holiness Ecumenical Patriarch Bartholomew I and the spiritual offerings from the prayers at the churches and holy relics of Constantinople, the group from the Slavic Orthodox Vicariate departed for home.