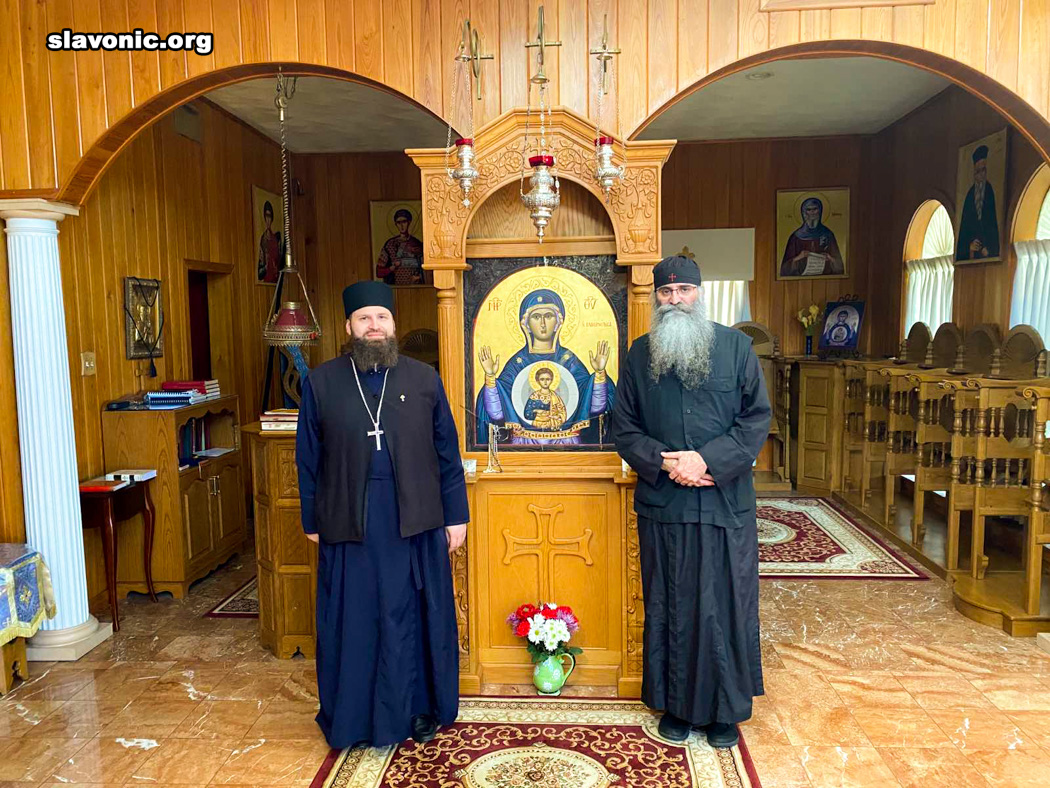 Monasteries have long been spiritual havens, places of special continuous prayer and monastic development. Believers often go to the holy monasteries in order to spiritually experience and feel the special grace of their prayerful atmospheres.

There are three full-fledged Orthodox monasteries in Florida.  The oldest of these is the Russian monastery of St. Nicholas the Wonderworker in Fort Myers, located in about 2 hours’ drive from Miami.  It houses a collection of more than 600 holy relics of Christian saints, the largest in America.  The other two both Greek, are located in Central Florida, approximately 5 hours’ drive from Miami.  On February 18 Archimandrite Alexander Beyla, Vicar of the Slavic Orthodox Vicariate of America, together with his guest Archimandrite Charalampius Nichev, a representative of the Bulgarian parishes under the Ecumenical Patriarchate, made a pilgrimage trip to these monasteries and visited their brotherhoods.

The first stop of the pilgrimage was the Panagia Vlahernon Monastery near the city of Williston.  It was founded in 1999 by the contemporary elder Archimandrite Ephraim Moraitis (+2019) of Arizona, one of nineteen established by him in America and Canada.  The monastery is dedicated to the famous Blachernae church in Constantinople (Church of Panagia Vlacherna) where the Most Holy Theotokos appeared and in whose honor the feast day of the Holy Protection (October 1) was established.  In the first years after the formation of the monastic community, the monks cleared the acreage of an abandoned estate, renovated the mansion into a church, and converted the garage into a refectory.  In the second half of the 2010s, a snow-white church with a blue dome dedicated to the Archangel Michael was erected in the traditional style of Mediterranean architecture. On the monastic grounds there is a large pond with a fountain and land allocated for a cemetery.  The visitors were warmly greeted by the abbot, Archimandrite Polycarp, who conducted a tour of the monastery and told them of its history.  They also discussed the current state of affairs in the St. Nicholas Monastery.  Fr. Polycarp shared his memories of the founder and abbot of the monastery in Fort Myers, Archimandrite John Lewis (+2007), expressing his joy that the relics of Elder John had become incorruptible and that Florida is being glorified with new saints.

The pilgrims next visited the Convent of the Annunciation of the Theotokos near the town of Reddick, which was also founded by Elder Ephraim almost a year before Panagia Vlahernon Monastery.  In the center of the property there is the main building with a large pavilion, a church, refectory, cells, and a courtyard with arches.  The Abbess Ephraimia showed the visitors the church and told them the history of the convent, in particular its spiritual connection to the ancient Greek monastery of St. John the Baptist in Serres, which was revived in the 1980’s through the efforts of Elder Ephraim.  In addition to their religious duties the nuns of the Annunciation Convent are engaged in the manufacture of several types of incense according to the ancient recipes of the Holy Mount Athos and Greece.

Archimandrite Alexander invited Father Polycarp and Mother Superior Ephraimia to visit St. Nicholas Monastery in Fort Myers and St. Matrona of Moscow Cathedral in Miami expressing his hope that in the future the abbots and representatives of the monasteries would visit each other to celebrate feast days and monastery holidays.  At the end of the visit to the Greek monasteries both hosts and guests exchanged gifts, among which was the current calendar of the Slavic Orthodox Vicariate.  One of the pages is dedicated to the Elder Ephraim of Arizona, who Archimandrite Alexander met in 2015 when he went on a pilgrimage to the monastery of St. Anthony in Arizona. After a prayer and blessing of the Elder, he managed to acquire the new building for Miami Cathedral and restore the monastery of St. Nicholas from its ruinous state.  In the 1980s, seeing that America had become a spiritual desert, Archimandrite Ephraim stepped down from being an Abbot of one of the monasteries on the Holy Mount Athos and came to the United States where he founded monasteries that became centers of Orthodox Christianity.   When he fell asleep in the Lord years ago his funeral service was performed by Archbishop Elpidophoros of America, who is our ruling bishop.   In all the monasteries that Father Ephraim founded in the USA and Canada, there are many parishioners and pilgrims from Slavic countries.

Information/addresses of the Florida Orthodox Monasteries: