Homepage » Publications » Patriarch Irenaeus of Serbia Blessed the Icon of St. Sava for the Monastery of St. Nicholas in Fort Myers 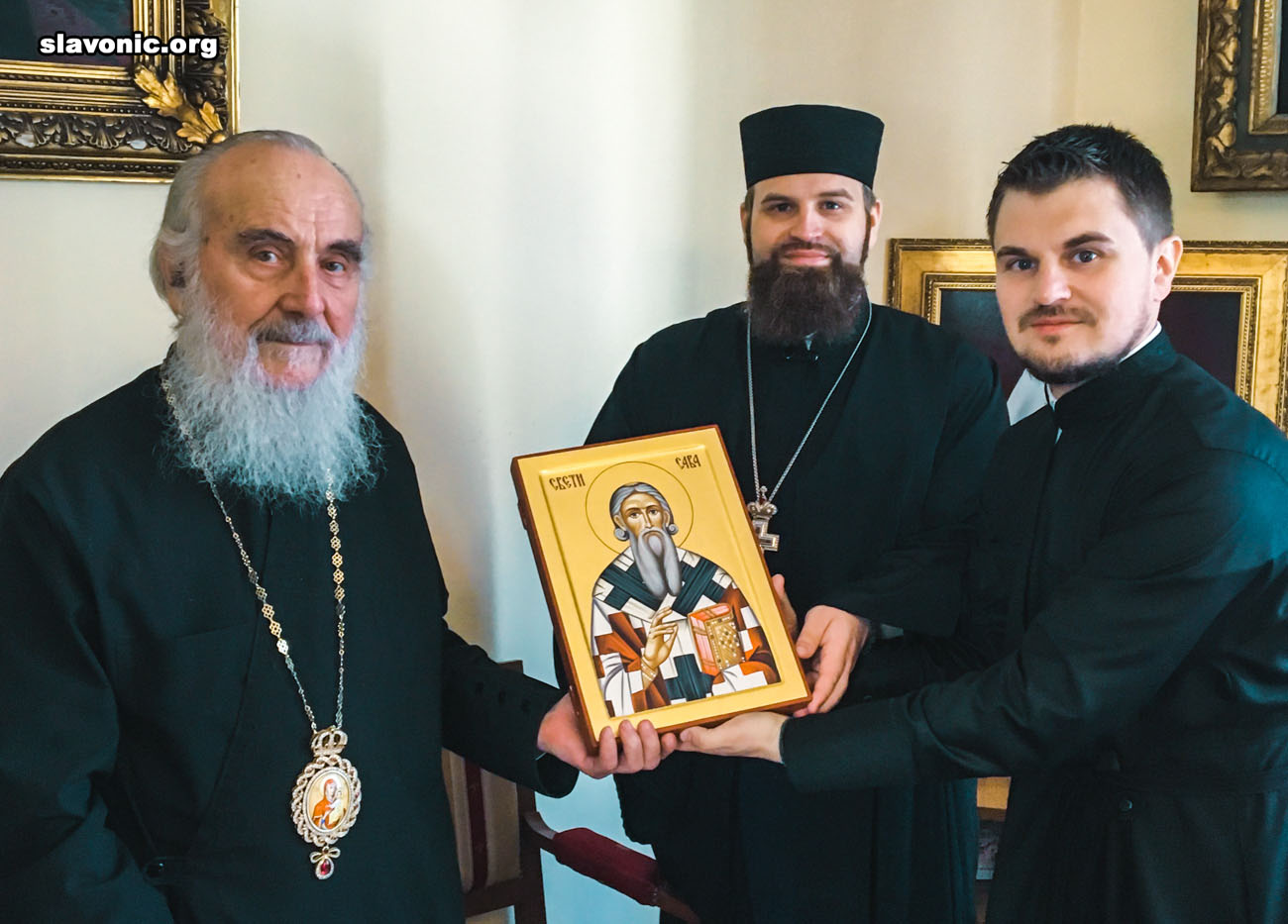 Patriarch Irenaeus of Serbia Blessed the Icon of St. Sava for the Monastery of St. Nicholas in Fort Myers

In 2018, Archimandrite Alexander Belya together with his brother Sub Deacon Ivan went on a pilgrimage to Serbia.

The journey began on June 20th with a visit to the Serbian capital city of Belgrade. The pilgrims visited the residence of the Primate of the Serbian Orthodox Church, His Holiness, Patriarch Irenaeus (Gavrillovic), and were given an audience with him.

During the meeting with Patriarch Irenaeus, Archimandrite Alexander spoke about Orthodoxy on the American continent, and the development of the St. Matrona of Moscow Cathedral, where he is a Rector. He also told about life in the monastery of St. Nicholas the Wonderworker in Fort Myers, Florida, which had just celebrated its 40th anniversary in 2018. Archimandrite Alexander explained that not long ago the monastery was about to be closed, but now there are once again monastics in prayer, divine services are held daily, restoration work on the church and bell, and renovation of the living quarters, as well as landscape improvements being completed. Patriarch Irenaeus spoke of his recent visit to the United States, in particular, the celebration he led dedicated to the glorification of St. Mardarije of Libertyville.

At the end of the meeting, His Holiness received a memorable gift, a copy of an antique icon of the Mother of God painted before the Russian Revolution. In return, the Patriarch presented the pilgrims with an icon of the most venerated Serbian religious figure, Saint Sava, with a personal signature: “Blessing for the Monastery.”

After the meeting with His Holiness, Archimandrite Alexander and Ivan, visited the Cathedral of the Archangel Michael, which is located next to the Patriarchate. The Cathedral was built between 1837-1840. In 1920, after the restoration of the Patriarchate of Serbia, the ceremony of enthronement of Patriarch Dimitrije (Pavlovice; +1930) took place there. The Cathedral contains the relics of the Serbian Kings St. Stephen III Uros (+1331) and St. Stephen Stiljanovic (+1515). In addition, many hierarchs of the Serbian Church are buried on the cathedral’s land. These include Metropolitans Michael (Jovanovic; +1898) and Innocent (Pavlovich; +1905), and Patriarchs Gabriel V (Dozhich; +1950) and Vincent (Prodanov; +1958), as well as Serbian rulers of the Obrenovic Dynasty Milos and Mikhailo.

The pilgrims from America then visited the Museum of the Serbian Orthodox Church at the Archangel Michael Cathedral. The keeper of the museum conducted a tour for the guests and gave them a brief history of the Serbian Orthodox Church. The museum, founded in 1954, re-opened after a restoration in 2013. The museum’s collection displays about 300 items, but has thousands more in storage. The exhibits include icon cases, vestments, episcopal amulets, books, crosses, censers, documents, seals and many other Serbian religious art items beginning in the 13th century from regions throughout Serbia. The museum collection is formed primarily of pieces from the sacristies of monasteries of the Fruska Gora area in Vojvodina, which contains artifacts transferred during the great resettlement of the Serbs in 1690, and the churches of Eastern Syrmia.  The shroud of King Milutin, the cloak of the Holy Prince Lazarus containing a heraldic emblem (1389) and the gallery of the portraits of the Serbian Patriarchs are of special interest.

The next destination of the pilgrimage to the Holy places of Belgrade was the Church of St. Mark.  Built between 1931-1940, it is currently a cultural landmark in the city housing the sarcophagus which contains the relics of the founder of the Serbian Kingdom Tsar Dusan (+1355). The church also holds the tomb of Serbian Patriarch Gabriel (Doric; +1991). They then visited the Church of the Holy Trinity, in which the wonderworking icon of Kursk-Root of the Mother of God was stored from 1927-1944. St. John of Shanghai and San Francisco, as well the first head of the Russian Orthodox Church Abroad, Metropolitan Anthony (Khrapovitsky), both prayed in this church. It also contains the remains of the leader of the White Guard Movement, General Peter Wrangel (+1928). \The Russian necropolis at the New Cemetery belongs to Holy Trinity Church, where many Russians who fled Russia after the October Revolution of 1917, as well as after the end of the Civil War, are buried. The Iverion Chapel in the cemetery, is built in the likeness of the Moscow original, where a copy of the Iverion icon of Mother of God is stored. Archimandrite Alexander and Ivan prayed in the crypt of the chapel where the Metropolitan Anthony (Khrapovitsky; 1936) was entombed.  Bishop of London Nikolai (Karpov; +1932) and Protopresbyter Peter Belovidov (+1940), the first Rector of the Trinity Church, are also buried here as well as the hierarch of the Orthodox Church Outside of Russia, Bishop Theophan of Kursk and Oboyansk (Gavrilov; +1943). Near the chapel is a crypt where the remains of approximately 400 Russians soldiers and officers of the Russian Army who perished in the Great War of 1914-1918 in the Balkans.  At this mass grave the hymn “Eternal Memory” was performed.

The last place that the American pilgrims visited on their first day of the trip was the Serbian Church of St. Petka (Paraskeve). It is located in the Lower Town of the Belgrade Fortress, next to the oldest church in the city, the Ruzhitsa. The church was constructed in 1937 on the site of where a miraculous spring has been active since ancient times. There was a small chapel in which the relics of the saint were stored, however they are presently in the Church of Ruzhitsa.

On June 21, Archimandrite Alexander and Ivan visited the Rakovica Monastery which was built in the Fourteenth Century in the outskirts of Belgrade. They prayed at the grave of His Holiness Patriarch Paul (Stojcevic; +2009), whose memory the Serbian people honor very deeply. They also visited the Monastery Cathedral of the Archangels Michael and Gabriel, which is decorated with beautiful frescos. They also visited the water springs of St. Petka, located next to the monastery.

In the Cathedral of St. Sava in Belgrade, which the pilgrims visited last, they were met by the Vicar of the Belgrade Diocese, Bishop Stephen of Remesiana. The cathedral is dedicated in honor of the first Serbian Archbishop and a national hero of Serbia, Saint Sava (+1236). It was built at the site of the burning of his relics by the Ottoman authorities in 1594. This is one of the largest Orthodox churches in the world, built on the image of the Hagia Sophia in Constantinople.

Bishop Stephen took them on a tour of the lower section of the cathedral which honors the Holy Martyrs Yermil and Stratonik, and spoke about the ongoing renovation work in the main part of the cathedral, which will be completed soon. Archimandrite Alexander presented Bishop Stephen a painted icon of St. Matrona of Moscow. His Grace then gave the guests an icon of St. Sava.