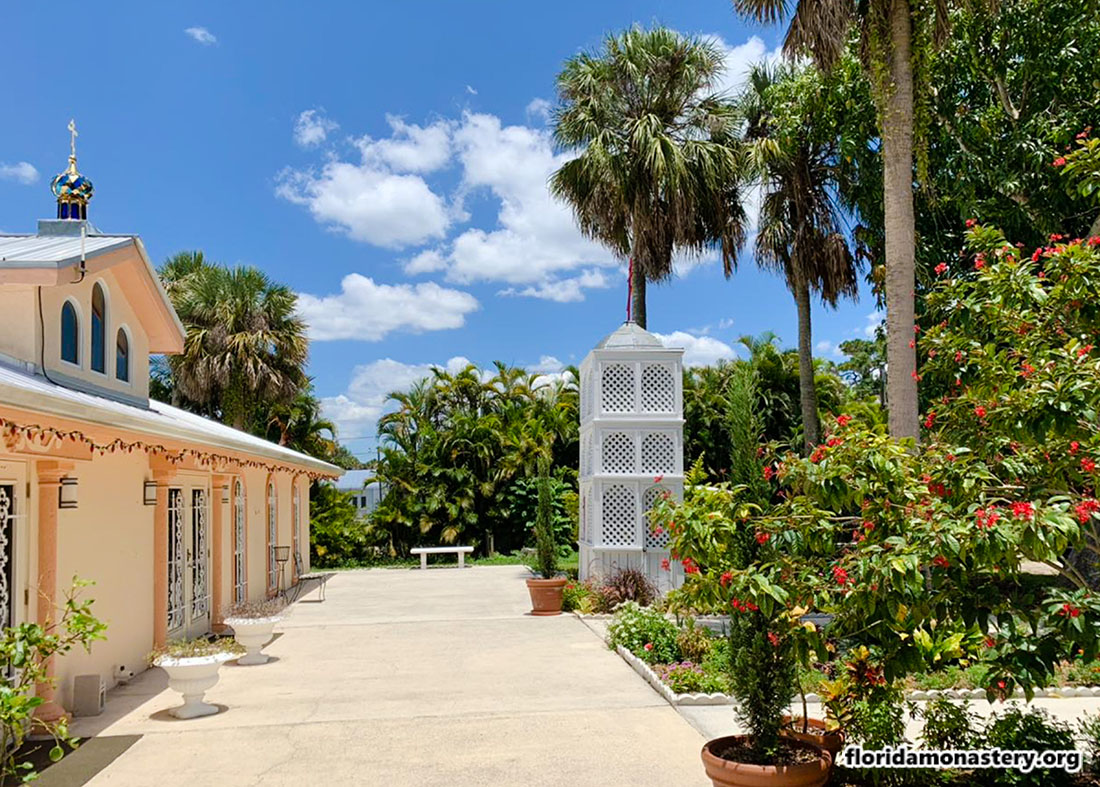 Monastery of St. Nicholas the Wonderworker in Fort Myers (Florida)

The Monastery of St. Nicholas the Wonderworker in Fort Myers is located in a picturesque area of ​​12 acres (about 6 hectares), in two hours’ drive from Miami. This is the first Orthodox Monastery in Florida and nowadays it’s the only Russian one.

Several generations of monks and nuns performed monastic obediences in the Monastery for over four decades. Thousands and thousands of people found consolation here in the vicissitudes and sorrows of their lives. After all, the monastery is a place of the special presence of God, who always protects the place together with all the people praying and working in it through the prayers of St. Nicholas the Wonderworker, the Monastery’s heavenly Patron Saint.

The history of the Monastery of St. Nicholas the Wonderworker began in 1978 with Archimandrite John Lewis. He is still highly revered by locals for the creation and development of the monastery. It should be noted that initially it was a monastery and was named after the icon of the Mother of God “Joy of All Who Sorrow”, but later, after the miraculous appearance of the icon of St. Nicholas the Wonderworker, it was renamed after this saint and was turned into a Monastery.

Archimandrite John led the monastery for almost three decades. During this time, the monastery has become a significant center for educational and social work. The monastery has provided support to thousands of people in need of physical, emotional and psychological assistance, and helped them to rectify difficult life situations. Father John knew 14 languages ​​and performed divine services in different languages ​​that united Orthodox people of different nationalities in a common prayer and at the same Chalice.

In 2007, shortly before the death of Archimandrite John, the monastery found itself in a straight circumstances and was on the verge of extinction. In order to prevent the community from ceasing to exist, Fr. John left it in the care of Matushka Andrea, his spiritual pupil.  At that time she returned from Greece, where she studied the Greek language and got acquainted with the monastic life from the inside. From that moment on, the monastery became a Monastery. Matushka Andrea D. Nichols applied every effort to keep the Monastery afloat, even though she was almost all by herself on its large territory. Over the course of a decade she was able to run the Monastery smoothly. Several of her accomplishments are a spiritual and cultural center built in 2010, a memorial library of Archimandrite John with literature in many languages , and so much more. But, nevertheless, the monastery was still in a difficult situation. In 2015, when Abbess Andrea’s assistant passed away, it became very difficult for the Abbess to run a large Monastery and pay all the bills. Matushka Andrea expressed her wish to go into spiritual solitude and, seeing how much work was done for the development of the Cathedral of St. Matrona of Moscow in Miami, she asked his Abbot, Archimandrite Alexander Belya, to help the Monastery.

At the end of 2016, Father Alexander was appointed Hegumen, and a new stage in history began at  the Monastery of St. Nicholas the Wonderworker. During this time, the following was done for the Monastery:

– the monastic life was revived: daily services according to the monastic charter began, domes were installed on the temple, the Monastery’s bell tower was restored, 6 hectares of the monastery territory were thoroughly cleaned, etc. The Monastery was filled with parishioners and pilgrims. It became a spiritual center not only for Russians, but also for Americans, and Orthodox believers of other nations living in Florida;

– a complete reconstruction of the building that sites the Monastery’s office and the church shop was carried out, including the replacement of the roof and installation of air conditioners;

– One of the buildings was renovated and turned into a pilgrim hostel, which now receives guests of the Monastery;

– 30 beehives were purchased and installed for the Monastery’s apiary, which provides excellent honey and wax for candles.

Today, there are two churches on the territory of the Monastery: the main one named after St. Nektarios of Aegins, and the small one named after the prophet Moses. Two workshops are now functioning; a sewing one and icon painting workshop.

The monastery created by Father John has gone through a lot over its 40-year history, but, despite of everything, it has always been and remains a beacon of spirituality on Florida’s soil. The Monastery is located in a picturesque area where the air is always very pure. If you visit the St. Nicholas Monastery even once, you will certainly want to come here again, because it is a very spiritual and prayerful place in which the presence of God is felt.

Celebration of the 40th Anniversary of the Founding of the Monastery

In 2018, the Monastery hosted festive celebrations dedicated to the 40th anniversary of its foundation. The holiday, which was attended by about 350 Orthodox people, was led by Metropolitan Hilarion of Eastern America and New York, the First Hierarch of the Russian Orthodox Church Outside of Russia, and three other hierarchs.

The service was held under the auspice of the miraculous Theotokos of Kursk Found Among the Roots, also known as Kursk Root Icon of the Sign (Panagia). In commemoration of the 40th anniversary of the monastery, several relics of the Great Martyr George the Victorious and part of the head of the Holy Martyr Eutropius of Saintes were donated to the Monastery.

Relics of the Monastery

There are several great relics constantly on display for the prayerful worship of the orthodox people such as a piece of the tree of the Life-Giving Cross of the Lord and the relics of the heavenly patron of the monastery – St. Nicholas the Wonder-Worker. In general, the largest number of Orthodox relics in America is collected here: there are relics of more than 600 saints in the Cathedral. There are the most numerous in all Americas relics of the Great Martyr George the Victorious, as well as the relics of the apostles, early Christian saints, saints of Russia, Ukraine, Georgia, Greece, Western Europe and America.

Also, two highly revered icons, in particular, the icon of Saint Nicholas, the Patron Saint of the Monastery, and the icon of the Most Holy Theotokos “Joy of All Who Sorrow” which is the first English-language icon are kept in the monastery.