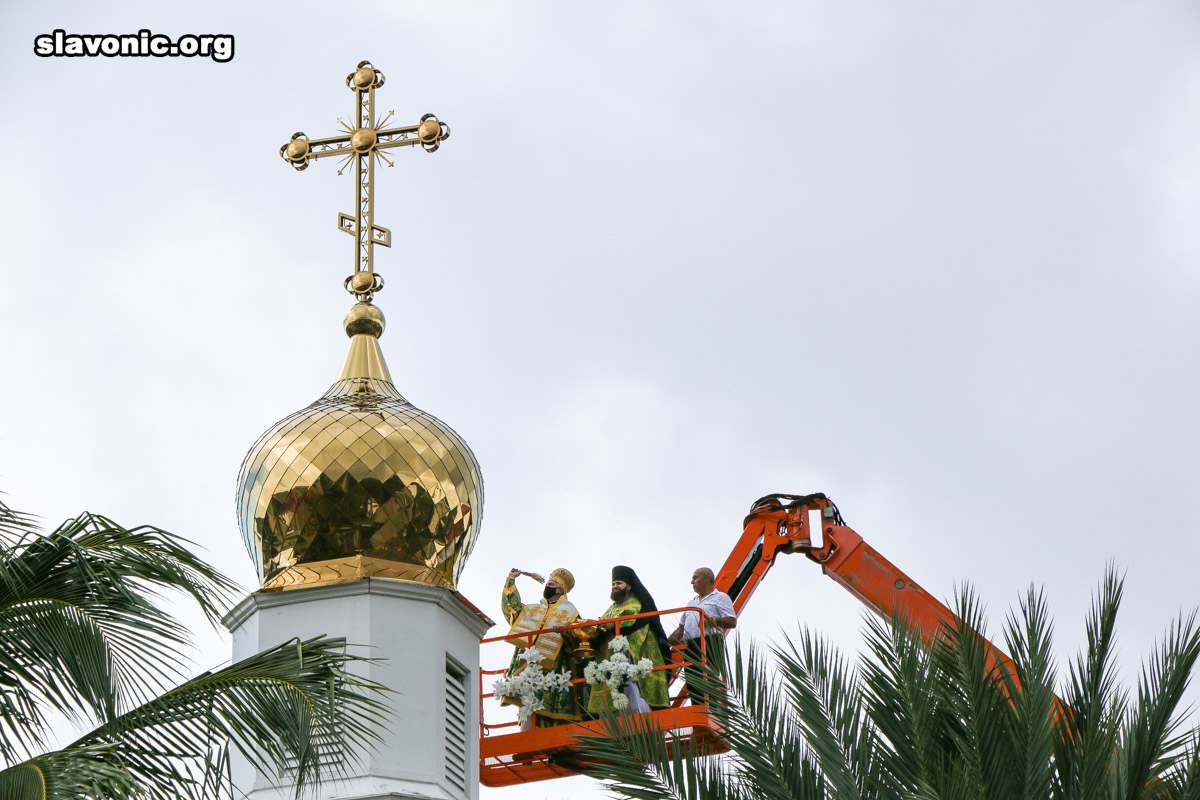 On November 22/9 the Orthodox Church celebrates the feastday of Saint Matrona of Moscow.  This first and the only parish dedicated the saint in America was opened nine years ago in Miami.  In 2015, the Community of St. Matrona moved into a new and spacious cathedral in Dania Beach.  It is one of the largest on the southeastern coast.  The Cathedral of Saint Matrona of Moscow is also the Seat of the Slavic Orthodox Vicariate in the Greek Orthodox Archdiocese of America.

From November 21-22 the Primate of the Greek Orthodox Archdiocese, Archbishop Elpidophoros, visited the Cathedral to celebrate its dual anniversaries.  On the evening of November 21, His Eminence, accompanied by Metropolitan Alexios of Atlanta, visited the cathedral, praying before its numerous relics, which include those of its patroness and St. Nicholas the Wonderworker as well as the relics of 115 saints.  The guests also venerated the copy of the miraculous Athonite icon of the Mother of God known as the “Pantanassa” (“Most Holy Queen of All”).  The visitors were also showed pieces of the future porcelain iconostasis, which will be the first in America.  Most icon screens are wooden and easily damaged by the termites and the humid climate in Florida.  One made of faience/porcelain allows it to be preserved for many decades and passed on to future generations.  It will be the first of its kind in America.  The iconostasis, which consists of more than one thousand small parts, is scheduled to be installed by next year in time to commemorate the 10th anniversary of the parish.  The visitors continued their tour with a look at the classrooms of the Parish Sunday School.  The final stop was a viewing of the central dome of the cathedral, which had been installed the day before.  It is an important accomplishment for the parish as the project was difficult and took almost two years to complete.  Archbishop Elpidophoros and Metropolitan Alexis were very impressed by the Cathedral complex. They praised the Rector, Warden, and parish members for their work.

On November 22, Archbishop Elpidophoros of America led the celebration of the Divine Liturgy.

The children of the Parish School greeted their archpastor in the narthex of the Cathedral, performing religious songs and poems.  The Archbishop served with the Vicar of the Vicariate, Archpriest Alexander Belya, Rector of the Brooklyn Cathedral, Archpriest John Spasyuk, cleric of the Cathedral, Archpriest Michael Gutsul, Fr. Theodore Tudorov, Rector of St. Nicholas Church in Hollywood, Florida (Bulgarian Orthodox Metropolia of America), Archdeacon Dionysius of the Greek Archdiocese, and Protodeacon Rostislav Zadorozhny and Deacon George Hero of the Brooklyn Cathedral.  Metropolitan Alexios of Atlanta was also present in the altar.   A reliquary containing the relics of the miracle worker St. Spyridon of Trimythous was brought to the Cathedral as well.

At the end of Liturgy, Archbishop Elpidophoros addressed the parishioners with a sermon. In commemoration of his first visit, the Archbishop presented an altar cross to the Cathedral.  On behalf of the clergy and laity of the Slavic Vicariate, Archimandrite Alexander presented a bishop’s set (a cross and two panagias) to His Eminence and an icon of St. John of Shanghai and San Francisco to Metropolitan Alexios.  Deacon George and parishioners who volunteer for the Cathedral were awarded the Certificates and Medals of St. Matrona of Moscow.  At the end of the ceremony, Archbishop Elpidophoros used the example of the mothers who take care of their children expecting nothing in return to explain the relationship of the Ecumenical Church as the “Mother” of the Slavic Churches

The entire congregation and all the clergy then went outside to witness and participate in the long-awaited consecration of the central dome of the Cathedral.  Miraculously the rain that had been pouring non-stop from the early morning stopped long enough for the ceremony to take place.   After the consecration, it resumed again. The break in the weather allowed Archbishop Elpidophoros and Archimandrite Alexander to be taken to the central dome on a crane in order to consecrate it.   The blessing of the Lord through the prayers of St. Matrona, or “Matronushka” as she is popularly called by Slavs, seemed evident to the faithful attending this historic event.

Many thanks to Paul, the servant of God, and his family as well as to all the others who contributed to a good deed of making and installing the dome.