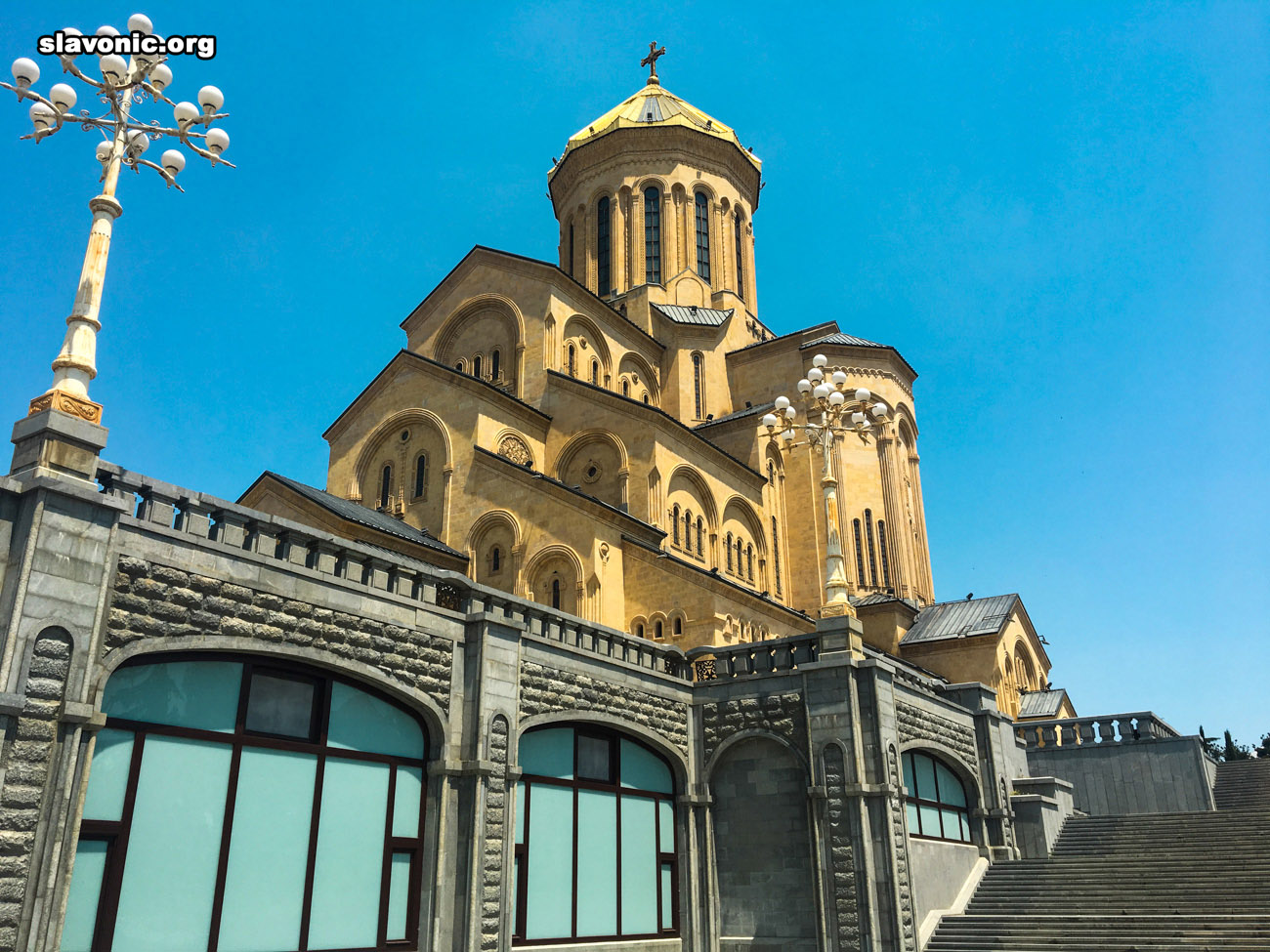 Patriarch Ilya II of Georgia: “You Are Doing Much for Orthodoxy in America”

In 2018, Archimandrite Alexander Belya, together with brother Ivan, went on a pilgrimage to Georgia.

It began on June 13 with a visit to the residence of the Primate of the Georgian Orthodox Church located in the nation’s capital city of Tbilisi. The meeting with His Holiness the Catholicos- Patriarch of All Georgia Elijah II (Shiolashvili) was held in festive and heartwarming atmosphere.

During the conversation, His Holiness was interested in the current condition of Orthodoxy in America. The guests said that there is trend of Catholic and Protestant churches closing, while the number of Orthodox churches were on the rise. Archimandrite Alexander told the Patriarch about life in the Monastery of St. Nicholas the Wonderworker of Fort Myers, the oldest in Florida, which just celebrated its 40th anniversary in 2018. He explained that not long ago the monastery was on the verge of closure, but now there was monastic prayer again with daily liturgical services being held.  The church, bell tower and all other buildings were being renovated, as well as the landscape being developed.

At the end of the meeting Patriarch Elijah told the guests, “You are doing a lot for Orthodoxy in America”. The words spoken by his Holiness will remain in our heart for the rest of our lives.

The Primate then blessed the guests gave them icons with reliquaries of saints whom the Georgians greatly revere; the Iverion Mother of God, St. Nina the Enlightener of Georgia, and the Great Martyr St. George. Each pilgrim also received as a gift a reliquary with the remains of St. George.

Their first destination was the Bodbe Monastery of the IX century, located approximately 120 kilometers from Tbilisi. In 347, after her thirty-five year missionary work was completed, the Equal-to-the-Apostles and Enlightener of Georgia St. Nina, retired on the site of the future monastery, which currently houses her relics. Archimandrite Alexander placed the icons presented to him by Patriarch Elijah by her relics in order to further sanctify them. The Convent of the Miraculous Myrrh-Streaming Icon of the Mother of God is one of the most revered sites in Georgia.

On the same evening, the American pilgrims visited the Cathedral of the Assumption of the Mother of God in Zion, located by the Kura River in Old Tbilisi. It is a historically significant church in Georgia as it was the site of Patriarchate until 2004. The cathedral bears the name of Mount Zion in Jerusalem, where the body of the Mother of God was taken into Heaven. Built at the end of the Sixth Century, it has been repeatedly demolished and rebuilt. It currently has the features of medieval Georgian architecture. The main shrine of the Cathedral contains the Cross of St. Nina, the central site of pilgrimage in Georgia. Church legend states that St. Nina received a grapevine cross from the Mother of God before she was sent on her mission. With this cross, which the saint braided into her hair, she came to Iveria (the ancient name for Georgia) in 320. Believers have the opportunity to venerate this shrine only once a year on St. Nina’s feast day (January 14/ 27), when they kiss the cross through a protective glass. With the blessings of Patriarch Elijah, the guests from America were allowed to kiss the cross itself.

On June 14, Archimandrite Alexander and his brother Ivan arrived in the oldest city of Georgia, Mtskheta, which is located a few kilometers away from Tbilisi. It is famous for the Svetitshoveli or “Life-Giving Pillar” Cathedral. It was built in honor of the Twelve Apostles and for centuries has remained one of the main churches of Georgia. It is also the largest surviving historical building in Georgia, erected between 1010-1029 on the site of a damaged church. The cathedral houses two of the most important holy objects of Christianity: the Holy Cloak (Chiton) of the Lord, received by one of the soldiers, who won it by lot after they crucified Jesus Christ; and a section of the Life-Giving Cross of the Lord. Throughout its existence, the Cathedral served as the place of the coronation and funerals of the Georgian royal family of Bagrationi. In the Svetitshoveli Cathedral near the Chiton of the Lord, people come to read the Indestructible Psalter, just as in the Cathedral of St. Matrona of Moscow in Miami.

Mtskheta is also the location of the Samtavro Convent of St. Nina, established in the Fourth Century. The Enlightener of Georgia first resided at this location after coming to Iveria. St. Gabriel (Urgebadze) resided in the monastery from 1970 to 1980. His relics are now resting in the ancient Samtavro Monastery Church of the Transfiguration. Pilgrims pray and venerate the relics of St. Gabriel, anointing themselves with oil from the lamp. Samtavro also houses the graves of the Holy King Mirian and Queen Nana, and the relics of St. Abibos Nekressky.

Afterwards the pilgrims travelled to Jvari (Holy Cross) Monastery located on the outskirts of Mtskheta. Founded in the Seventh Century, it was at this site, according to historical sources, that St. Nina erected a cross.

On June 15, during the last day of their visit, the American pilgrims visited Holy Trinity Cathedral (Tsminda Sameba) in Tbilisi, the main church of Georgian Orthodoxy, consecrated in 2011. They venerated the “Hope of Georgia” Icon, containing the image of all the Georgian saints, as well as the other sacred objects of the Cathedral.