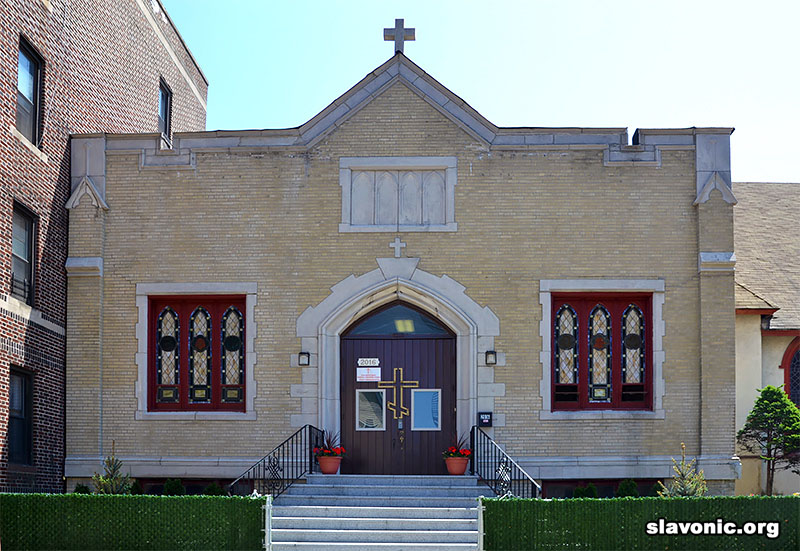 Cathedral of St. John the Forerunner in Brooklyn (New York)

New York is often called the capital of the world, and Brooklyn is a part of it. More importantly, Brooklyn is the center of the Russian-speaking world in New York. In 2009, the Church of St. John the Forerunner was founded in Brooklyn. Under the leadership of its Rector, Archpriest Alexander Belya, the parish quickly grew and flourished.

In 2014, the parish moved to a larger, and more spacious premises of a former Methodist church in southern Brooklyn. It underwent extensive renovations and a unique entrance arch with a dome was built right next to the church, which became a novel architectural achievement  in Brooklyn.

In 2015, marking the day of the feast of its Patron Saint, the Church of St. John the Baptist, the largest Russian church in New York, was given the status of a cathedral making it a truly significant and historical year in the life of the parish.

Over time, important events in the life of the Eastern American Diocese of the ROCOR were celebrated at the St. John Cathedral in Brooklyn, such as the 100th Memorial of the repose of St. Raphael of Brooklyn, the 70th anniversary of the birth of the First Hierarch of the ROCOR, etc.

In Brooklyn Cathedral, missionary work is being conducted with newly arrived Russian-speaking immigrants.

The Parish School for Children named after St. Sergius of Radonezh was organized in the Cathedral. Under the guidance of experienced teachers, 70 children, aged from 6 years old and up, study in it. The following disciplines are taught, the Law of God, Russian and Ukrainian languages, music, drawing, etc. The students of the school show excellent results. For example, they regularly participate in the Russian Olympiad for All-American students, winning second places and awards in 2018, and the first places in Adult programs in 2019. Weekly lessons for adults are also held at the Cathedral concentrated on the study of the Law of God, as well as the English language. They help immigrants to better adapt in America, integrate into the American environment and culture, find work, etc. It should be noted that the English language school in Brooklyn is the first one to operate at an Orthodox church.

The free newspaper “Orthodox Abroad” has been published since the opening of the church. Each  edition includes articles in several languages ​​on 16 colorful pages. Each time about 10,000 copies are distributed. The Orthodox Calendar of St. John the Baptist Cathedral is also published annually and distributed free.

Today St. John the Baptist Cathedral is the spiritual center of Brooklyn and the largest Russian cathedral in New York. It was possible to unite a large number of Brooklyn residents, who pray together and accept God’s grace from the same Chalice, under one roof, the roof of the St. John the Baptist Cathedral.  These people are representatives of various ethnicities of multinational New York: Russians, Ukrainians, Belarusians, Georgians, Moldovans, Americans and others.