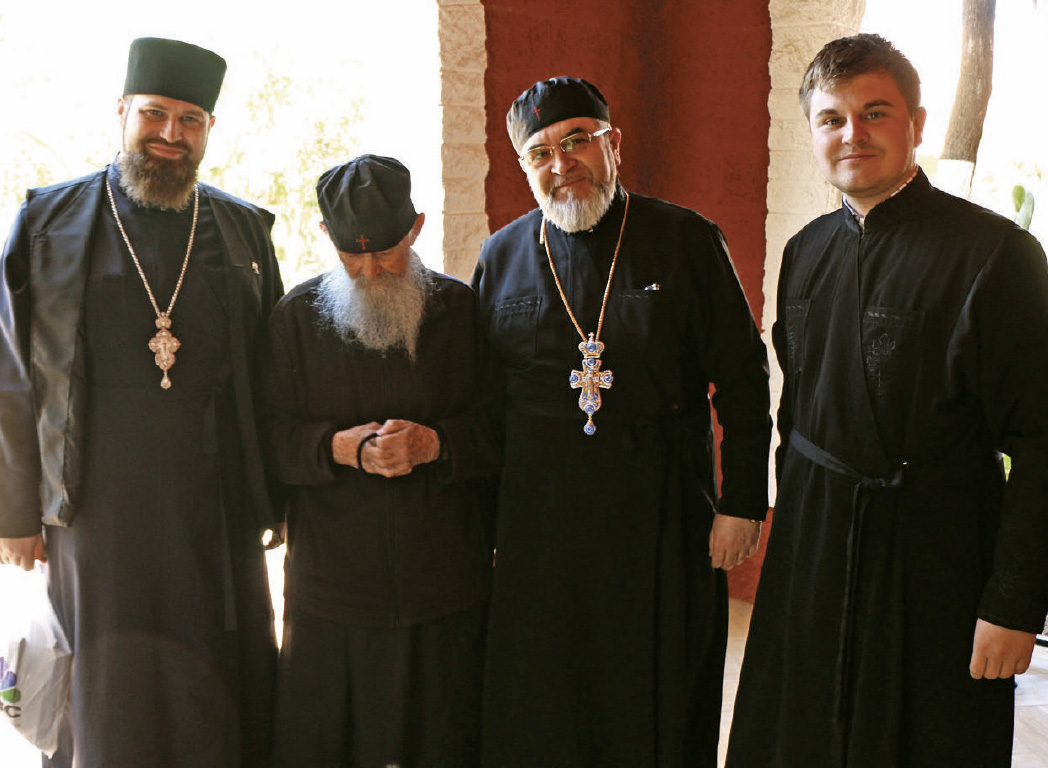 Blessing of Elder Ephraim of Arizona

In the Sonora desert, near the town of Florence, which is 130 kilometers away from the capital of Arizona, Phoenix, there is a Greek Orthodox Monastery dedicated to St. Anthony the Great. It is the state’s most popular site, second only to the famous Grand Canyon. This monastery is visited by more than 20,000 pilgrims annually. Many who have had the good fortune to visit regard it as the monastery of “the green oasis and the miracle in the desert.”

In 2015 this unique place, was visited by the Archpriest Alexander Belya, with his two sons: Archimandrite Alexander and Reader Ivan. This was a special meeting because Father Ephraim blessed the brothers to buy the St. Matrona of Moscow Cathedral in Miami and begin missionary work in America. The pilgrims then took a photo with Elder Ephraim. His blessing is felt to this day as the brothers were able to buy the Cathedral in Miami and revive the monastery of St. Nicholas in Fort Myers.

The Monastery of Saint Anthony is accessible from Phoenix by an hour-long drive through the desert. The monastery, which can be seen on a hill long before arrival, greatly contrasts the surrounding environment. In the beginning it is like a lighthouse in a sandy ocean until its pilgrims are met by the snow-white church of the Prophet Elijah.

The history of the foundation of St. Anthony’s is very engaging. Its founder is the famous Elder Ephraim of Philotheou (+2019), who is also referred to as the “Apostle of America.” This is because through his efforts nineteen monasteries were established on American soil. Initially, Elder Ephraim planned to build the monastery in a different location, but according to God’s will, he lost his way and built it in a place “indicated by the Lord” (On this location in 1995 he heard the ringing of bells, similar to his monastery on Mount Athos).

Even though the monastic community was founded in a dry desert environment, through the prayers of the Elder they found water 300 meters below the ground. As a result of this, the site turned into a green oasis. While in the past nothing grew there but cactus, there are now gardens with bananas, apples, oranges, oilseeds, grapefruit, and pistachio trees, which grow in tandem with vegetables that grow in a separate garden. The territory is decorated with various flowers and bushes, as well as palms, pines and other trees which total about three thousand.

The architecture of the monastery is also notable. The buildings, the churches, garden houses, chapels, brethren’s houses, and accommodation for pilgrims, were all built according to different architectural styles. This is not a coincidence, since Orthodoxy has one prominent trait, which is Universalism or the combination of diversity of styles and manner of the people practicing the Orthodox faith. The monastery’s buildings have architectural inspirations from different regions. The Cathedral built in honor of St. Anthony the Great and St. Nectarius of Aegina, resembles a Greek basilica; the Church of the Prophet Elijah is built in the style of Mediterranean Greek architecture; the Church of St. Nicholas of Myra is in the Serbian style; the Church of St. George the Victorious Great Martyr is built with a high bell tower in the Romanian style, and the Chapel of St. Demetrius the Great Martyr of Thessalonica has elements of the Russian style. There is also the Chapel of St. Seraphim of Sarov, which is influenced by the style of wooden architecture of northern Russia. Eclecticism is the basis of the entire monastic architectural plan, in which different elements of styles prevail.

On the territory of the monastery there are roads that are carefully constructed out of stone plates and are decorated by barriers of various colored bricks. The monastery is surrounded by a symbolic fence that separates the “Perfect Oasis” from the wild desert that stands behind it. Serval fountains create micro-climates, the main one being built in the shape of a cross. There are multiple garden houses on the territory, so that both monks as well as pilgrims and tourists can all shield themselves from the scorching sun. In the midst of the park there are stone benches, decorated with carvings, stone flowerpots, bowls, animal statues, mainly deer and roe deer, and finally columns with Byzantine crosses at the top.

Matins and the Divine Liturgy in the monastery of Saint Anthony are conducted following the Canon of Mount Athos. The service begins at 1AM and ends at 4 AM. In the second half of the day, the evening Vespers is held and the Akathist is read. All the worship services are being held in the reverent and spiritual atmosphere. In particular, the monks and pilgrims pray in front of the local shrine, the miracle working icon of the Virgin of Arizona. After breakfast, the monks begin their duties, which include caring for the park and territory, working in the garden, cleaning of the churches and guest buildings, as well as construction work.

The founder of the monastery, the Elder Ephraim, became a monk at just 19 years of age, coming as a novice to the Holy Mountain (Mount Athos). He became a disciple of the Holy Elder Joseph the Hesychast. Elder Ephraim restored the Monastery of Philotheou on Athos, earning him the name Ephraim of Philotheou.  After coming to the United States in the 1970s, he established nineteen monasteries on the North American continent (New York, Texas, Florida, Washington, South Carolina, Pennsylvania, Illinois, California, Michigan, Montreal, and Toronto) with two more currently under construction. The Elder eventually chose St. Anthony’s in Arizona as his residence, where he prayed without stopping for his spiritual children and the salvation of the whole world. He reposed in the Lord at the monastery in 2019.