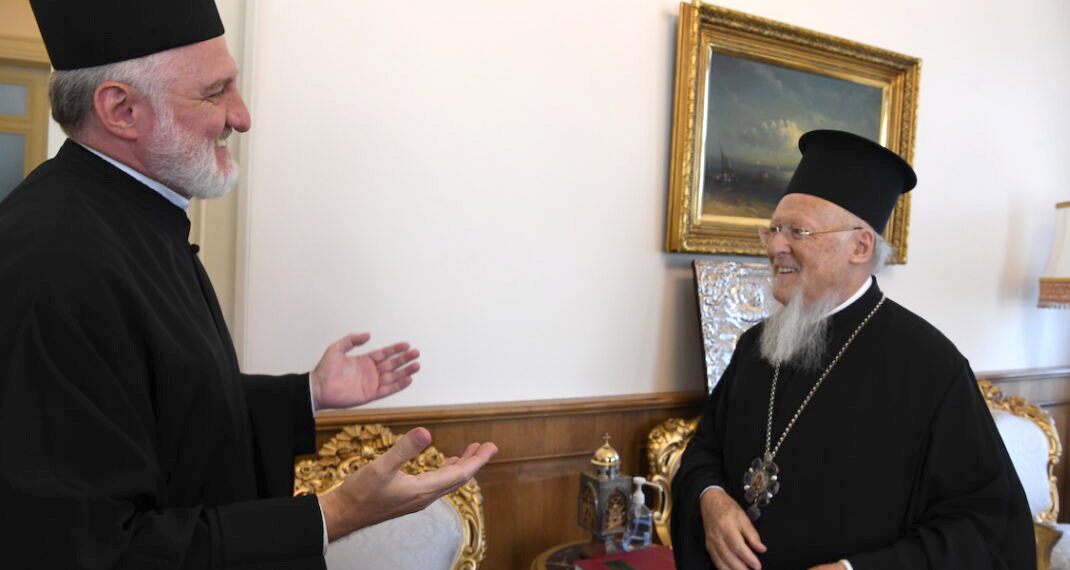 June 30, 2021
Synaxis of the Holy and Glorious Twelve Apostles

Unto the Most Reverend and Right Reverend Hierarchs, Pious Priests and Deacons, the Monks and Nuns, Presidents and Members of Parish Councils, Honorable Archons of the Ecumenical Patriarchate, Members of Leadership 100, the Day and Afternoon Schools, Philoptochos Societies, the Youth, Greek Orthodox Organizations, and the entirety of the Christ-named Plenitude of the Holy Archdiocese of America.

My Beloved Brothers and Sisters in Christ,
Εὐλογημένος ὁ ἐρχόμενος ἐν ὀνόματι Κυρίου! (Ψαλμός 117:25)
Blessed is he who comes in the name of the Lord! (Psalm 117:25 LXX)

With unsurpassed joy, we announce on the Feast of the Glorious Twelve, the Apostolic Visit of His All Holiness BARTHOLOMEW, Archbishop of Constantinople-New Rome and Ecumenical Patriarch to the United States, October 23 – November 3, 2021. This Visit, the first in twelve years, will commence the day following the Thirtieth Anniversary of the Election of His All-Holiness as Ecumenical Patriarch, and include the same anniversary of His Enthronement on the venerable See of the First-Called Apostle Saint Andrew on November 2nd. The Apostolic Visit will inaugurate the Centennial Celebration of the founding of the Greek Orthodox Archdiocese of America (1922 – 2022), which will be observed next year across the country.

The Ecumenical Patriarch will begin by being welcomed in our Nation’s Capital at the highest level of diplomatic and ecclesiastical dignity. The official itinerary will be shared in the coming weeks, and it will include a visit to the Metropolises of Pittsburgh and Chicago, with a major ecumenical event taking place at the University of Notre Dame in Indiana.

The Visit will conclude in New York City, and will culminate in a dedicatory “Opening of the Doors” of the Saint Nicholas Greek Orthodox Church and National Shrine at the World Trade Center on the very anniversary of his Enthronement as Ecumenical Patriarch. All of our Metropolises, Parishes, and Institutions will be able to share in this joy, through interactive features that will accompany His All-Holiness on his Visit. Therefore, with gladness and enthusiasm, let us welcome the Spiritual Father of us all, and with heartfelt cries proclaim: “Blessed is he who comes in the name of the Lord!”

With paternal blessings in the Lord,