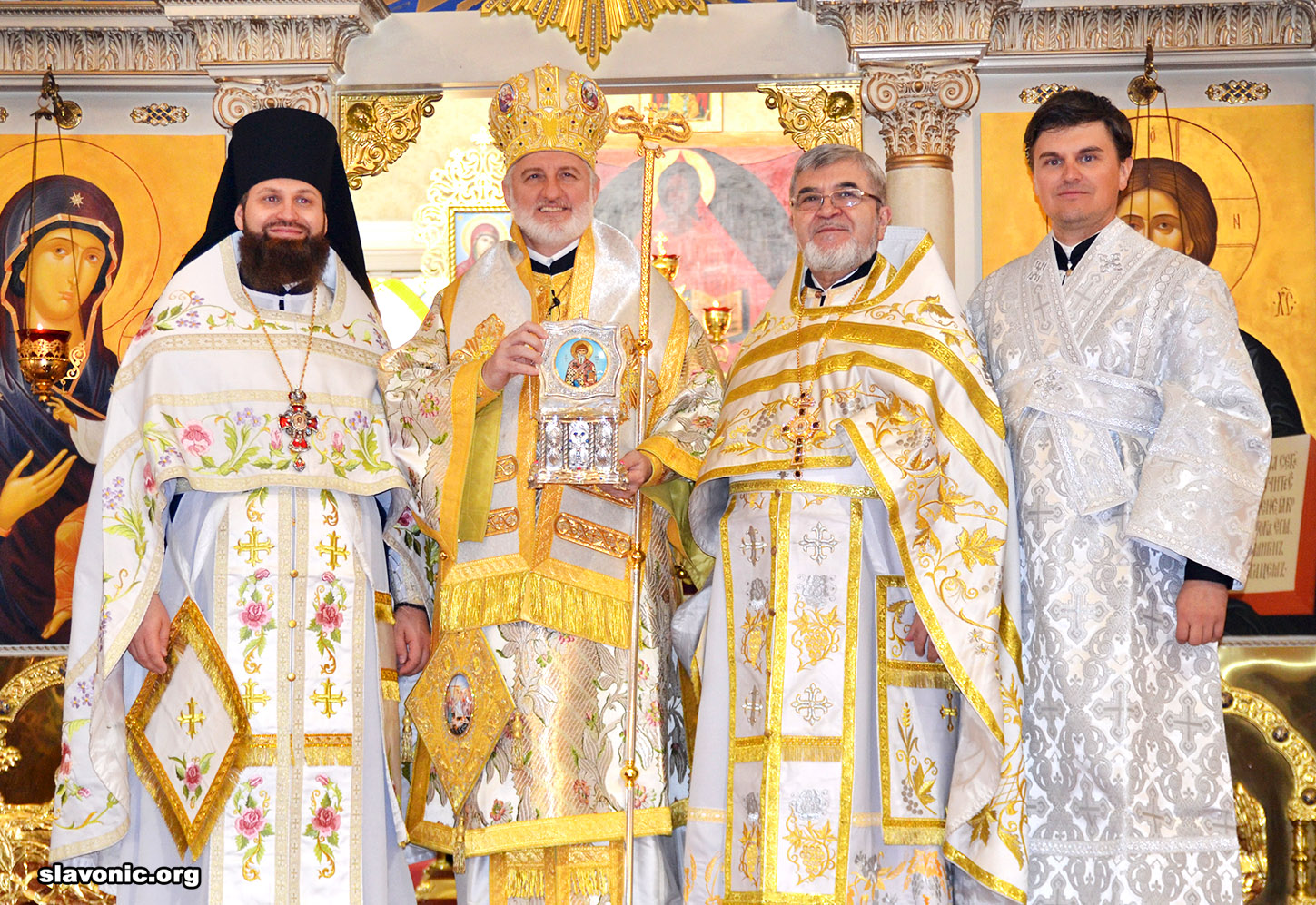 Archbishop Elpidophoros presents the relics of St. Spyridon to the Slavic Vicariate

On May 24, the Primate of the Greek Orthodox Archdiocese of America Archbishop Elpidophoros visited the Slavic Vicariate for the first time.

At the end of the Divine Liturgy held at St. John the Forerunner & Baptist Cathedral in Brooklyn, His Eminence presented the Vicariate with a silver reliquary containing the relics of St. Spyridon, who is honored by Orthodox Christians as a miracle worker.

The faithful pray to him for a timely resolution to their troubles.  His relics rest on the island of Corfu, which many pilgrims from all across the world visit.

The Slavic Orthodox Vicariate wishes to thank Archbishop Elpidophoros for this priceless gift which will give the faithful the opportunity to venerate Saint Spyridon through his holy relics.

Saint Spyridon of Tremithus was born towards the end of the third century on the island of Cyprus. He was a shepherd, and had a wife and children. He used all his substance for the needs of his neighbors and the homeless, for which the Lord rewarded him with a gift of wonderworking. He healed those who were incurably sick, and cast out demons.

After the death of his wife, during the reign of Constantine the Great (306-337), he was made Bishop of Tremithus, Cyprus. As a bishop, the saint did not alter his manner of life, but combined pastoral service with deeds of charity.

According to the witness of Church historians, Saint Spyridon participated in the sessions of the First Ecumenical Council in the year 325. At the Council, the saint entered into a dispute with a Greek philosopher who was defending the Arian heresy. The power of Saint Spyridon’s plain, direct speech showed everyone the importance of human wisdom before God’s Wisdom: “Listen, philosopher, to what I tell you. There is one God Who created man from dust. He has ordered all things, both visible and invisible, by His Word and His Spirit. The Word is the Son of God, Who came down upon the earth on account of our sins. He was born of a Virgin, He lived among men, and suffered and died for our salvation, and then He arose from the dead, and He has resurrected the human race with Him. We believe that He is one in essence (consubstantial) with the Father, and equal to Him in authority and honor. We believe this without any sly rationalizations, for it is impossible to grasp this mystery by human reason.”

At this Council, Saint Spyridon displayed the unity of the Holy Trinity in a remarkable way. He took a brick in his hand and squeezed it. At that instant fire shot up from it, water dripped on the ground, and only dust remained in the hands of the wonderworker. “There was only one brick,” Saint Spyridon said, “but it was composed of three elements. In the Holy Trinity there are three Persons, but only one God.”

Saint Spyridon lived his earthly life in righteousness and sanctity, and prayerfully surrendered his soul to the Lord. His relics repose on the island of Corfu (Kerkyra), in a church named after him (His right hand, however, is located in Rome).